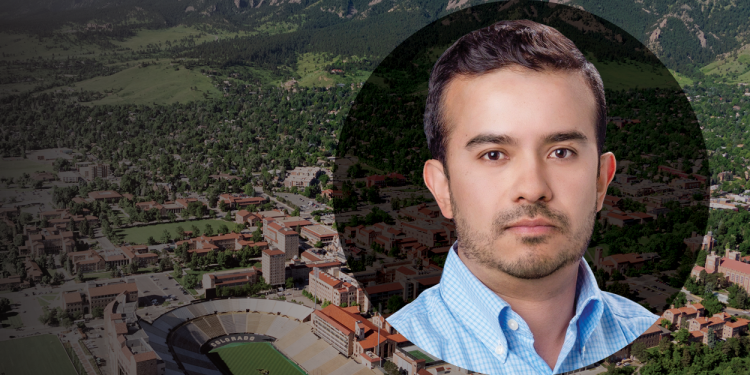 Data is everywhere in the world today.

Assistant Professor Jorge Poveda has received a CAREER award from the National Science Foundation that will allow him to explore how all this data can be used to control systems – from robotic networks to the electrical grid.

“The question is whether we can systematically integrate this data into our controllers to perhaps improve system performance or be able to achieve something that is unachievable without data,” he said. “If I use machine learning elements that integrate real-time and recorded data, how can I incorporate these elements into my controllers to overcome the fundamental limitations of model-based approaches?”

“The question is not an easy one because most results from the data-driven control literature rely on softness in some sense,” Poveda said. “They exploit the smoothness of the controller to achieve guarantees of robustness and guarantees of stability.”

While he intends to start by developing models of data-assisted switching controllers, which switch between sub-algorithms for better performance, he also plans to extend these results to networks and multi-systems. officers.

“In large-scale networks, we can’t demand that every node in the network have access to unlimited data, but that data is going to be distributed among the different nodes,” he said. “The question is how should these nodes talk to each other? How to share their data in real time while preserving the closed-loop stability of the underlying dynamic systems? »

Poveda is also interested in integrating game theory knowledge. He explained that in many social engineering systems, decision makers may have conflicting interests. He wants to explore if it is possible for an agent to dynamically manipulate its data at the expense of others.

“There are a lot of important questions because we anticipate that many engineering systems in the future will follow these kinds of rules,” he said.

He used the example of transport systems and energy markets. Experts predict that over the next decade, people will be able to buy and sell energy to the electric grid based on their transportation needs.

“So now we have these competitive markets with potentially contradictory behaviors such as collusion between some buyers and sellers,” he said. “If we have companies or users that implement data-driven or learning-driven algorithms to update their actions, how robust will those algorithms be in the face of conflicting data that is dynamically manipulated by deceptive entities? with “inside” information?”

Poveda and its graduate students are also eager to share their control systems knowledge with the next generation of diverse STEM students. As part of the CAREER proposal, they are planning several activities to recruit, mentor, and retain students from underrepresented backgrounds, including K-12 summer camps, discovery learning, and an annual regional workshop. on control.

Lab members will begin by participating in an NSF science communication workshop to learn more about how to make the complicated topic accessible to those outside of the field, Poveda said.

“I think it’s exciting that the students in my group are involved,” he said. “These are skills they can use in the future, and the mentorship is something we really appreciate.”

CAREER Fellowships provide approximately $500,000 over five years to junior faculty members “who have the potential to serve as academic role models in research and education and to advance the mission of their department or organization.”